You don’t need to live in a smart home to benefit from smart speakers. Alexa, Google Assistant, Siri, and other digital assistants can help you in dozens of ways, and you don’t have to lift a finger to summon them—just speak their names. If you’ve already decided you want a smart speaker, click here for our top recommendations.

But consider your decision carefully. In a perfect world, these devices would be interoperable, so you could buy one brand because it’s better for music, another brand because it’s the best for smart home control, and a third because it’s superior for retrieving general information from the internet. That’s not how it works in the real world. Once you commit to one platform, you’ll want to stick with it.

Updated on February 28, 2022 with our news story about a partnership between Teladoc and Amazon that allows Echo users to ask Alexa to arrange a virtual doctor visit.

On the upside, choosing one brand of smart speaker over another generally won’t tie you into that brand’s entire ecosystem. Buying an Amazon Echo, for instance, won’t limit you to subscribing to Amazon’s music services—you can also use it with Spotify, Pandora, SiriusXM radio, and several other services. And even if you have a smart home system from one company, you can use voice commands to control smart home products that would be otherwise incompatible with that system—provided those devices are compatible with your digital assistant of choice.

That said, if you’re wedded to Google Play Music, streaming music from your account to an Amazon Echo is not perfectly seamless (the same goes for streaming music from Amazon’s services to a Google Home). And there are some major coexistence exceptions: Google is currently blocking its YouTube videos from appearing on the Echo Show and Echo Spot devices, for instance (although you can get there using a web browser on the second-generation Echo Show), and Apple’s HomePod will stream music only from Apple Music (or other services from a mobile device using AirPlay, but that ties up your mobile device). If you plan to mix and match third-party products with your smart speaker, do the research to make sure they’ll work together.

The best smart speakers have displays to convey visual information: Everything from song lyrics, to weather forecasts, shopping lists, videos, security camera feeds, and more. The second generation of Amazon’s Echo Show 8 easily justifies its $130 asking price—although we’ve yet to see what the new smaller and less-expensive ($85) Echo Show 5 can do. If that’s still too high for your budget, the displayless Echo Dot (4th Gen) costs just $50 and is frequently on sale.

The second-generation Google Nest Hub is giving Amazon a run for its money. The Google Assistant is far better when it comes to asking for general information, and Google has aggressively added support for third-party smart home products and services. This is also the best choice for folks who dig Chromecast, Google Photos, YouTube, and YouTube Music.

If you use a smart speaker mostly to control your smart home devices, and you don’t care as much about audio performance, pick up the fourth-generation Echo Dot. Amazon continues to improve its smart speakers’ audio performance, and you can pair two of them for stereo. You can even add an Echo Sub to a single speaker or a pair to enhance low-end frequency response. The Echo Dot with Clock variation features a simple and extremely handy LED display, but it costs a bit more.

Google once again takes the runner-up spot here, despite the improvements the company has made to its rebranded smart speaker. Yes, audio quality has improved, and Google Assistant is still smarter than Alexa, but Amazon is ahead of the game when it comes to hooks into the smart home. If you want better audio performance, the Google Nest Audio delivers a lot of bang for the buck, but it costs twice as much as the Mini.

If you’ve got the bread, Bowers & Wilkins has the best-sounding smart speaker on the market. It only supports Alexa, though, so Google Assistant fans might want to look elsewhere. Bowers & Wilkins is also promising several new and improved features—including multi-room audio support with the brand’s Formation series speakers—with future firmware updates. Make sure you can live with what’s missing before pulling the trigger.

Amazon’s Echo Studio is a great value for $200, and it has an integrated Zigbee smart home hub to boot. It’s outfitted with three 2.0-inch mid-range drivers (one firing left, one firing right, and one firing straight up) and a 1.0-inch tweeter that fires straight at the listener. A 5.25-inch down-firing woofer handles the lower frequencies and is mounted directly above a slotted bass aperture. You can pair two for stereo, and Amazon even offers an optional subwoofer.

Amazon regains the top spot in this category with its all-new Amazon Echo Show (3rd Gen). A 10.1-inch display that tracks your movement and rotates so that it always faces you is the big appeal here, but Amazon has also improved display quality, audio performance, and added its new AZ1 Neural Edge processor so that it can track your movement right on the device, enhancing your privacy by not uploading your image to the cloud. As with all of its more-expensive Echo devices, there’s an integrated Zigbee smart home hub, plus a radio that taps into Amazon’s new Sidewalk neighborhood network technology.

With its messy brand realignment out of the way, Google is making tremendous strides in its battle with arch-rival Amazon on the smart display front. The Google Nest Hub Max delivers great sound, fabulous picture quality, and tight integration with the Google ecosystem. Alexa is still the superior digital assistant when it comes to smart home compatibility, but that advantage won’t last forever.

OK, the Sonos Move is a better-sounding portable smart speaker, but the Sonos Roam is just so much more practical when you want to take your music on the go. It’s not a big deal to take the Move out on the patio, but stuffing it in a backpack and taking your tunes on a hike? You’re going to want to Roam for that. The Roam also costs a lot less than the Move. Don’t get us wrong, we absolutely love the Move, but when you want to roam, grab the Roam.

What can smart speakers do?

With the exception of Amazon’s Echo, smart speakers are powered by the same digital assistants used with smartphones. Siri comes from the iPhone, Google Assistant comes from Android phones, and Cortana from Microsoft’s now-dead Windows Phone platform (Cortana has since found a home in Windows 10). Alexa was created exclusively for the Amazon Echo, but can now be found in a host of other devices, ranging from the Ecobee Smart Thermostat to the Leviton Decora Smart Voice Dimmer.

At its most basic, a digital assistant is cloud-based software that understands natural language voice commands, performing tasks and fetching information for you. In the real world, digital assistants aren’t quite as sophisticated as that. While you don’t need to talk like a robot—e.g., “Alexa, set timer, 20 minutes”—they do get confused easily, and you’ll hear a fair amount of responses such as “Sorry, I don’t know that one” (that’s an Alexa phrase, incidentally) when you trip them up. The cool thing is that the algorithms powering digital assistants can learn over time and become better at predicting what you need.

Here are just a few of the things that most smart speakers can do (you can add “and more!” to the end of each bullet list):

Help in the kitchen

* There are caveats when it comes to using a smart speaker for home control. Smart home devices that can be controlled via Wi-Fi don’t require any other hardware. Products that use the Zigbee or Z-Wave protocols depend on the presence of a smart-home hub, such as a Samsung SmartThings. Amazon’s higher-priced Echo models are exceptions to that rule, because they have an integrated smart home controller (although it’s limited to Zigbee) 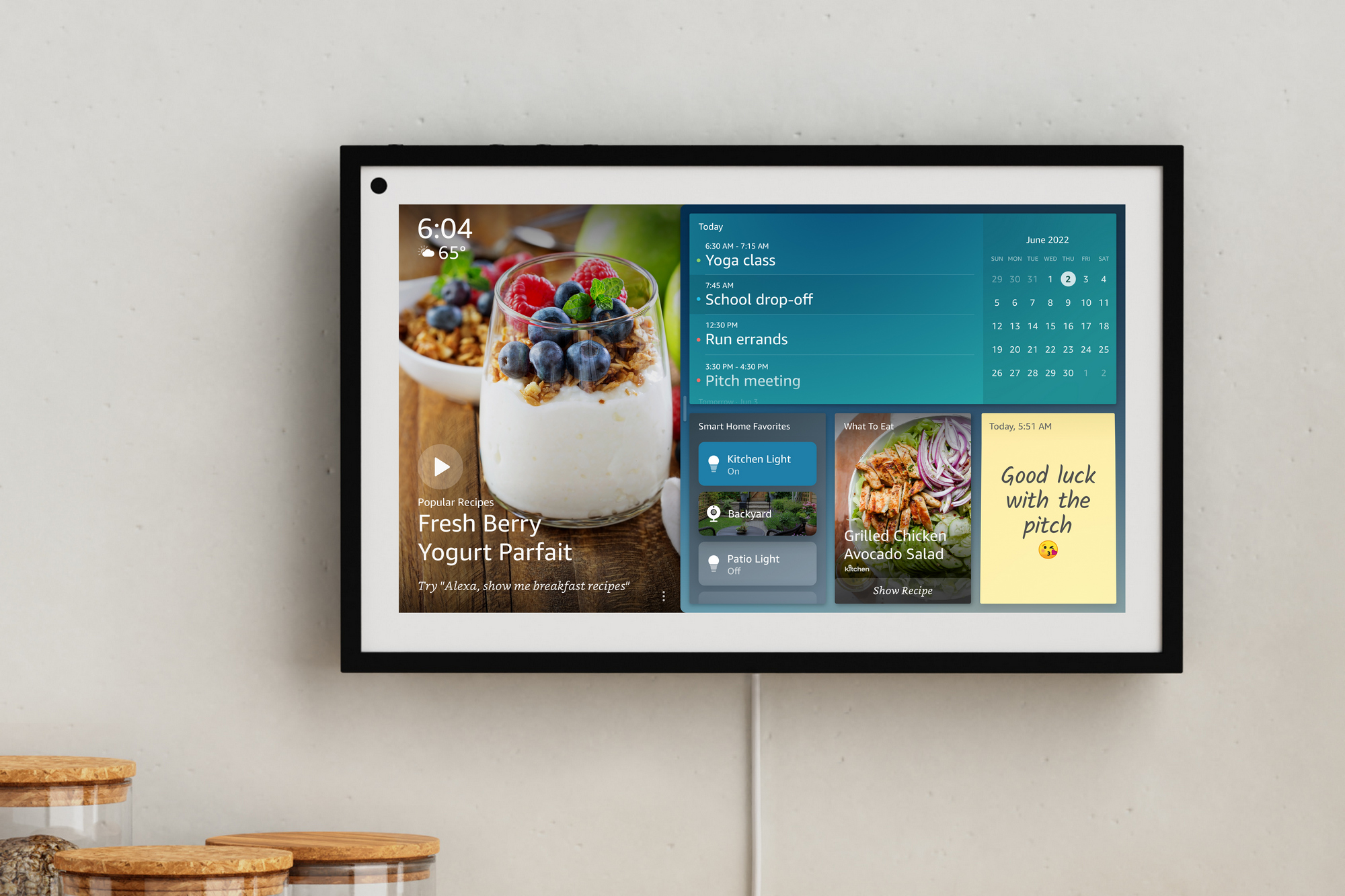